Re-membering Our ANZACs  November 11-17 Mullumbimby Ex-Services Club –  An exhibition commemorating the sacrifice made by our local community in World War One opens directly after the Remembrance Day service at the Cenotaph, Mullumbimby.

Under the direction of local Ceramic Artist Deborah Gower, the exhibition had artworks inspired by the memorabilia of descendants/relatives of Mullumbimby soldiers who fought in the First World War and one special artwork made from wooden crosses.  The crosses supplied by the Australian War Memorial have messages of commemoration written by descendants of veterans of WW1 and local Year 6 students from St John’s Catholic School and Mullumbimby Public School.  Workshops with students and descendants outlined the role and sacrifices of local men and their families in the First World War and participants learnt more about our local ANZACs putting faces to names normally written in stone, before writing messages of commemoration.

“I am honoured to be part of this project.  It brought to life the names of veterans who are commemorated at the Cenotaph in Dalley Street and gave character to the faces on the photographs that appear in the gallery of the Ex-Services Club.”

The crosses were hung as an artwork in the Ex-Services Club at Mullumbimby before being returned to the Australian War Memorial for distribution on the graves of fallen soldiers overseas.

and special thanks to

WW1 descendants and the Mullumbimby community for support with this project

“When I re-member the sacrifices of the people of Mullumbimby during World War One my mind reels with images of the explosions and the blood red poppies that rose through the horror of the fields of Flanders, France.  I think on the loss of young men and how we remember the fallen each year at 11am on 11 November.”

‘For one hundred years many soldiers lay unidentified – buried deep beneath the shell shocked earth in Northern France.  In one day Australian casualties (dead or injured) amounted to approx. 5000 young men.  Recently many of the dead have been identified through the technology of DNA.  One of our Mullumbimby locals is presently having her DNA tested to identify a long lost relative killed in the Battle of Fromelles in July 1916.” 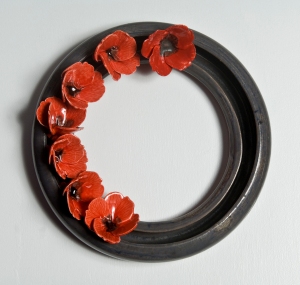 Circle Of Poppies by Deborah Gower (2014)

“Each November 11, I buy a poppy to remember the sacrifices made by those who fought in WW1.  A circle encompasses the memory of their sacrifice and the wreath like form of the vessel is a reminder of the trinkets which held pride of place in my grandmother’s cabinet.”

Age Shall Not Weary Them 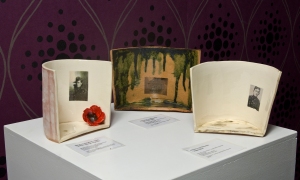 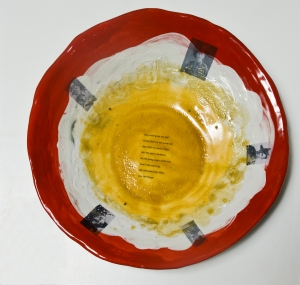 “Our boys served their country honourably. The figures vary but from a population in Mullumbimby district of around 1000 at that time it seems at least 233 men enlisted, 23 were killed overseas, 13 discharged through injury and 2 invalided; although some put the numbers much higher. This was a huge percentage of our fledging community. Most of our boys were aged between 19 and 43 with the majority being less than thirty years of age. While many came from farming and timber-cutting backgrounds there were also labourers, a mounted policeman, school teacher, white collar workers, postal officer and a cordial maker just to name a few occupations.

Wreath to Remember by Deborah Gower 2014

Wreath to Remember by Deborah Gower (2014)

“Each year on 25 April, Mullumbimby commemorates ANZAC day with a parade and the laying of wreaths at the Cenotaph.  Our boys fought in all the major battle areas – in the Dardanelles, Gallipoli, Egypt, Middle East, France and Belgium and on the Western Front.We remember so the lessons of the tragedy of war are not forgotten by future generations.” 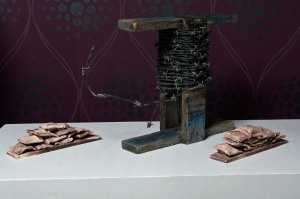 “Many of Mullumbimby’s young men fought and some are buried in muddy fields where trench warfare dominated.  Mud, barbed wire and sand bags symbolise the years these soldiers spent in the trenches that became their homes or their final resting place in WW1″.

Posted on September 18, 2014 by deborahgowerceramics

Invitation to descendants of WW1 Veterans and their families

As part of the Centenary of WW1 Commemorations and the exhibition Re-Membering Our ANZACs, a workshop will be held for descendants of WW1 to write messages of Commemoration on wooden crosses supplied by the Australian War Memorial. Ultimately the crosses will be displayed as part of an artwork for the exhibition, Re-Membering Our ANZACs Nov 10-17 and then returned to the Australian War Memorial for distribution overseas on war graves. 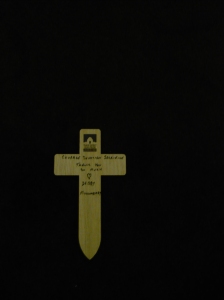 Together we will create an art exhibition to be held at the Mullumbimby Ex-Services Club in coordination with the 11 November 2014 Remembrance commemorations.

The exhibition will have artworks inspired by the memorabilia of descendants/relatives of Mullumbimby soldiers who fought in the First World War and one artwork made from crosses made by local students.